Oh Yeah, Isn’t That Clash Of The Titans?

(Yeah, you're getting a bit of backlog of stuff now that November's doomed attempt to focus on some longform writing is behind us. Here's something I went to in early November.)


It seems that I am becoming something of a regular visitor to the Hammersmith Apollo (really rather fittingly named for this last visit). In the last year, I’ve been to see Greg Davies, Flight Of The Conchords, The League Of Gentlemen and, in this latest visit, Mr Stephen Fry.

It was a somewhat different show to the others listed above. Heroes (or, to give it its full title, Stephen Fry Live! In Heroes) was part of a promotional tour to promote his latest book of the same name - a follow up to Mythos which retold the origins of Greek myths. This time around, Heroes focuses on the exploits of the mortal and semi-mortal individuals who also loom large in Greek mythology - Jason, Hercules (or Heracles), Theseus, and so on.

Included as part of the ticket price was a hardback copy of the book itself which was an especially welcome bonus. There was something heart-warming about looking round once we’d taken our seats to see a large number of people sitting around with their noses buried in the same book. This was clearly my kind of crowd.

The show itself took the form of a storytelling session / reading in which Stephen Fry either walked the stage to talk off the cuff or sat in a comfy armchair with side table to read directly from the book. In the hands of a lesser entertainer, this could run the risk of being a dry affair but Fry is a master of his art and knows how to keep an audience’s attention. His obvious passion and enthusiasm for the subject also shone through and his translating of these ancient tales into a format and form which is relatable and understandable to a modern audience was extremely effective (in a similar way to Neil Gaiman with his recent work on Norse Mythology). In fact, so swept up was he in the first half of the show in the stories he was telling, that he had to cut short some of the planned tales for the second half as he was in danger of running long (something which I’m sure the Hammersmith Apollo is pretty strict on).

All in all, I’d say that if you get the chance to see Stephen Fry hold court in front of an audience (whatever the subject), go for it. The man certainly knows how to be engaging, informative and (unsurprisingly) funny. 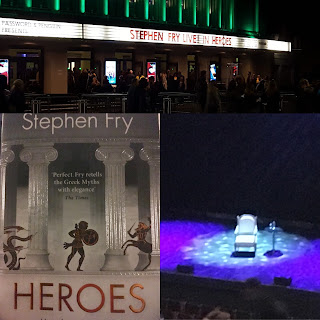 Posted by That Baldy Fella at 18:00 No comments:

How I Write A Book

Badly. Aha ha. No, actually, that’s true - having stated that I was attempting NaNoWriMo (eurgh - no, I don’t like the abbreviation either), I struggled to make it through to about 27,000 words before hitting a block that sitting and staring at the page couldn’t resolve. Once again, the month was uncompleted as I fell 23,000 words short of the 50,000 target. Quite a long way short, really. (For those of you who like a stat, I managed to write on 18 out of the 30 days so my average word count was 1,500 per day - daily word count to reach 50,000 was 1,667 so it was possible if I hadn’t got stuck.)

This isn’t really a “how to” guide. I clearly have no real idea what I’m doing. This is more a selection of notes of how I attempt to write rather than advice on how to write. It may be of interest to some and, if it’s not, don’t worry, there’ll probably be some pop culture reviews just around the corner instead (yes, I am predictable like that).

Ideas
Ah, the dreaded question. “Where do you get your crazy/wacky/zany/highly derivative ideas from?” Well, it all just percolates away from a variety of different sources. Odd articles you’ve seen online, the occasional overheard phrase, a line from a story, maybe even a combination of events in a board game. Any of these things and more besides could spark off an idea. For something novel length, I usually find that it’s when one or two or more of these things begin to collide that something longer begins to form.

Planning
I like a good notebook. I’d even go so far as to say that I have a bit of an obsession for them. That said, I also favour a few online tools as well. For me, Evernote is a useful online notebook tool as I can access it on my phone, tablet, and laptop (other electronic notebooks are available). I use Trello to help list out things like characters, locations and plot/story points - the advantage of using a tool like this is that you can have lots of small tickets (basically like online Post-it notes) allowing you to move stuff around and rearrange it as needed.

The level of planning will vary - sometimes I’ll have a good chunk of a notebook full of preparatory notes and sometimes just a few jottings and a rough idea. Things always change as you write so having all that prep in advance may not prompt the story to go the way you thought anyway.

Writing
I like writing longhand in notebooks. There’s a sense of satisfaction to having a selection of actual books on a shelf with your words written in them. I don’t always do it, though, as it’s not necessarily the most convenient way to do it. Normally when attempting NaNoWriMo, I tend to type straight into a Google Doc (other online collaborative document sharing tools are available) as, much like Evernote above, I’ve got it available on my phone, tablet, laptop, etc. There’s more of an element of risk in writing in a notebook as it may get lost or damaged (case in point:- the notebook used for this year’s novel got covered in beer due to an unfortunate can-piercing accident in my rucksack the other day). I am using as notebook this time as it makes it easier for me to work on a revised draft - the act of typing it up will be in effect a second draft as I will rework it as type.

Hopefully that was of some interest. As I said, I can’t really it advice as none of the above actually resulted in a novel this time around. Fills up a blog post nicely, though, doesn’t it? 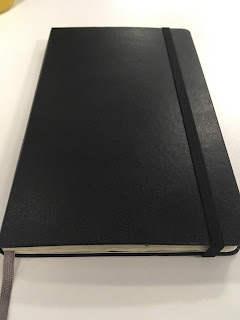 This Week, That Baldy Fella Has Enjoyed...

Things To See And... Well, See

A Note About The Chap Himself

That Baldy Fella
Thanks to networking sites, Nick has become accustomed to talking about himself in the third person so will continue to do so in this description.
Born and raised in the wilds of South East London but don't hold that against him. He's still civilised enough to be invited round for dinner.
He likes stuff but concedes that things can also be rather lovely too.

Brain Dumps What Have Been Posted